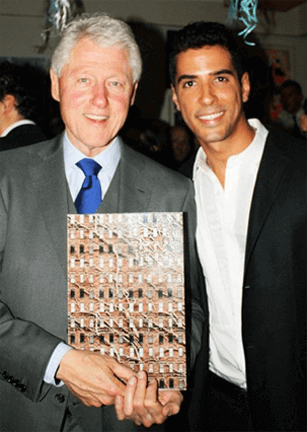 Javier Gomez, a Panamanian photographer living in Manhattan, met former US president Bill Clinton at a party last week, just a few days after the announcement that Clinton will present a lecture in Panama City on June 4. “I don;t believe in coincidences,” said Javier, “We chatted for a few minutes and I know that he is going to bring a great vibe and message to Panama. His message is actually similar to the inspiration behind my art.”

A former Wilhelmina Panama Talents model and Copa Airlines flight attendant, Javier moved to New York in 2004. Having worked on the other side of the lens, he says his inspiration has long been to “capture balance and aesthetics in order to appeal to a universal audience.”

“It was a big day for me,” said Javier, Clinton’s presidency was personally inspiring to me and I am very proud as an artist and as a Panamanian for having now the honor to have him as a collector.”

Javier studied photography at the New York University and with famous fashion photographer Steven Klein. His work is given by his keen eye for symmetry. serenity and “a thread that connects us all as people.”

Javier currently has limited pieces at Mali Chic House of Living on Calle 50 at Calle 70 in Plaza Sonoma. Mali Chic has a second location in Boquete, Ave. Principal Alto.