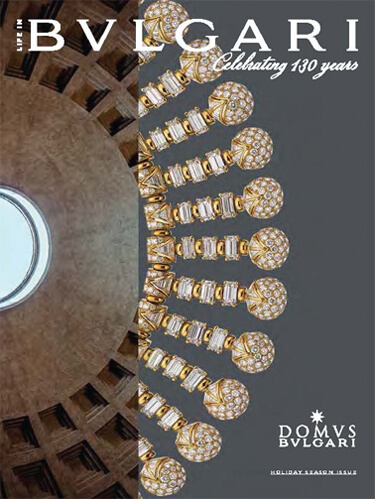 Life in BVLGARI editorial for the 130th Anniversary of BVLGARI  by Javier Gomez,  Dec 2014.

The beauty of Rome transcends time and space: every view contains a piece of history, takes your breath away, makes your eyes open wide in amazement. Bulgari’s jewelry has always paid tribute to the splendor of the Eternal City.

In a precious language, a narrative consisting of gold and precious stones, Bulgari has always told the world about the city of Rome – its architecture, mosaics, streets, bridges and ceilings. Javier Gomez is an artist and photographer who over the years has developed his own aesthetics by observing the architectural details of the world’s great cities: the lines of the façades, the cornices, the patterns of the paving stones from New York to Rio de Janeiro.

Gomez has photographed urban architecture in a surreal and abstract way so that it becomes universal. After decades of experience as a patron of the arts, Bulgari commissioned Gomez to create the images on the following pages.

Details of Rome, angles and corners that could belong to every pavement and building, here acquire new lights and colours, with unexpected gleams and sparkles. Gomez has captured the essence of the beauty of Rome, to which Bulgari is devoted. In every ceiling there is a diamond, in every ray of light there is a reflection of a precious gemstone. The architecture takes on a golden light, the lines of a stone base become tinged with the blue of a sapphire.

These photographs artfully convey the glory of the Eternal City, how it has always been – and will always be – it is the prime inspiration for Bulgari’s creations. These pages are Bulgari’s tribute to Rome’s eternal architecture. In Bulgari’s eyes, Rome is the most precious jewel of all.